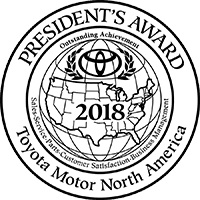 Ganley Toyota has won many awards that attest to the high quality of service provided, visit our dealership to see for yourself all the reasons we've earned the Toyota Presidents Award an impressive seven times! Our new and used car dealership understands that in order to establish a successful business that thrives, we must concern ourselves with the well-being of our customers. Our dedicated employees are committed to finding the Toyota vehicle you've always wanted and the financing that enables you to take that ride home today!

Our recognition doesn't end there, we've also had the honor of receiving the Certified Dealer Award from DealerRater, proving our commitment to providing quality used cars. We encourage you to take some time to explore our used car inventory right here on our website and contact us to schedule a test drive! Our prices are affordable, and our quality is high, find a pre-owned Toyota Corolla or Highlander today!

Ganley Toyota in Akron, OH is honored to have received such prestigious awards for our hard work, and we will continue to strive for excellence, bringing quality options to you from a team you can trust!

Each year, Toyota Motor Sales recognizes its top Toyota dealerships with the coveted President's Award. It's one of the highest honors that a car dealer can receive from Toyota, and is only awarded to those that have demonstrated a commitment to maintaining Toyota's high standards for customer satisfaction. Ganley Toyota is proud to have won the President’s Award an impressive seven times!

Board of Governors Award

This award recognizes the hard work of our sales staff, who have exhibited outstanding professional performance, new vehicle sales, and sales management.

Our service center works hard to deliver top auto service and repair in the Akron area, and this award recognizes their efficient operations and top-level customer service.

This award acknowledges the parts and accessories sales, as well as the customer service and retention, achieved by our parts staff.

Last but certainly not least, this top award recognizes our customer relations operations achievement, which confirms our overall commitment to our valued customers.